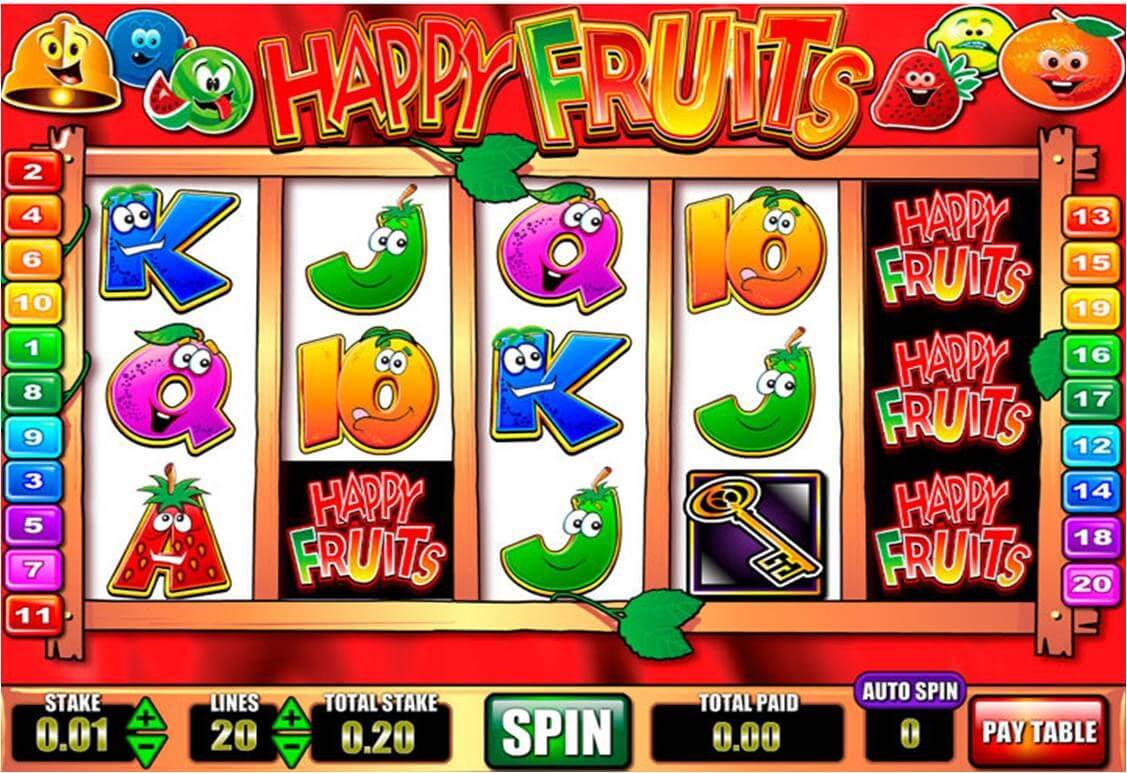 The Bell Fruit company is the developer of the Happy Fruits Online Slots machine, and this game features the very well-known, cheerful fruit machine symbols gamblers all over the world can recognise at once.

Happy Fruits Online Slots machine features five reels and 20 lines, and a splat feature along with a crazy streak feature, and a Super 7’s, the latter not being available in the more traditional betting terminal and arcade versions of the game.

Happy Fruits Online Slots machine provides a number of different pricing options for players, and these can be chosen by means of the plus and minus buttons available on screen, which will increase or decrease players’ bet per line.

Selecting the spin button when this process has been completed will start the reels off, but there is also an autospin function for players to make use of if they wish. To stop this feature, simply select the stop button, which will be in the same area of the screen that the autospin button was previously found..

Should a player manage to land three of the number seven symbols on the centre reels of the Happy Fruits Online Slots machine, the Super 7’s feature will be triggered. The sevens will be jumbled around on screen, and the player will need to select one. At this point a bronze, silver or gold number seven will be revealed, with coins tumbling from the symbol, and, when the coins stop pouring out of the seven the player’s multiplier will be revealed.

Three, four, or five keys will trigger the Happy Fruits Online Slots machine crazy streak feature. A set of reels will spin, accumulating symbols into a matrix, and when this row of symbols is completed the multiplier the player has earned will be revealed, counting toward the final feature multiplier.

Only symbols found on the centre line of the reels will be accumulated, with symbols on the first reel only accumulating the first column of the matrix, the second reels’ symbols accumulating in the second column, and so on. After each paid multiplier the symbol matrix will be emptied, and will then begin to accumulate once more. The reels will carry on spinning until three killer tomatoes have been collected, at which point the feature will end the player will be awarded the multiplier.

Line wins are multiplied by the bet laid on the winning lines, and all pay symbols must appear on active lines, and on consecutive reels, starting with the left-hand side reel. Only the highest win per line is paid, with multiple line and bonus wins added together.